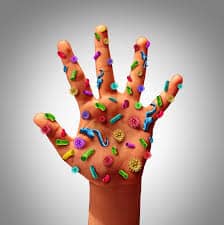 The workplace restroom is crawling with germs. Research has shown there are thousands of different species of bacteria on the floors and on other surfaces of public restrooms. Even worse, that bacteria is not simply lying dormant – it is actively multiplying and dispersing at alarming rates. In fact, a toilet can spray aerosolized feces as high as 15 feet into the air, and during the coure of 2 to 4 hours, bacteria can spread to more than 60 percent of frequently handled surfaces, such as door handles and sink edges. Handwashing is a great first step to ensuring all of this potentially harmful bacteria is removed from hands before building occupants leave the restroom. However, hand drying is where things can get dicey and has the potential to invite all of that bacteria back onto hands and further contaminate the facility. When considering which drying method to install into your facility’s restrooms – paper towels or hand dryers – here’s what you should consider.

The process of washing hands removes bacteria and brings it to rest on the surface of one’s hands. When testing paper towels after use, researches have discovered many of the bacteria previously on one’s wet hands are transferred to paper towels, as friction from the mechanical abrasive action of drying the hands is a key component of removing the bacteria. Hand dryers, however, while seemingly quicker and more convenient, literally suck up all of that restroom bacteria and blow it around the restroom and onto one’s just washed hands – leaving them just as dirty, or even dirtier, than before they were washed.

The University of Connecticut School of Medicine conducted a study that examined the bacterial growth across 36 university restrooms. They examined test plates exposed to 30 seconds of hand dryer air and plates exposed to normal restroom air – and then checked for bacterial growth. When hand dryers were off, the 2018 report said, they found very little bacteria present – about six colonies per plate. When the plates were exposed to 30 seconds of blown air, however, there were as many as 60 colonies growing on each plate.

When it comes to dollars and cents, hand dryers reign supreme. Paper towels also cost far more energy and money to manufacture when considering the cutting down of trees, manufacturing expenses and transporting expenses. Hand dryers, while creating less waste and long-term expense, can last for up to 7-10 years, while paper towels must be continually replaced. Facility managers have a lot of important decisions to make, many of which involve keeping those who come to work each day healthy and safe. When weighing the options between installing paper towels dispensers or hand dryers in workplace restrooms, decision makers must understand how imporant hand drying is to the process of removing potentially harmful bacteria. Paper towels may be a costlier option, but it is the choice that will keep employees the healthiest.